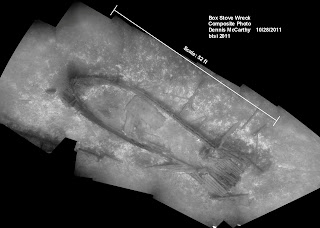 After months of research, a team of local history buffs concluded that the 50-foot “Box Stove Wreck” is probably the Benicia Boy that “blew away” and went under on May 21, 1883, said Dennis R. McCarthy, a veteran diver from Cape Vincent.

He and fellow diver Raymond I. “Skip” Couch found the wreck by pure coincidence last August and, unable to identify it, temporarily named it after the rather valuable cast-iron stove found in the hull.

Mr. McCarthy said the Benicia Boy — an 1872 sloop built on Galloo Island by
Sackets Harbor businessman Barney Eveleigh — had lost its anchors fighting a storm while trying to return to Cape Vincent, forcing its crew to jump onto the village’s old railroad dock before the vessel sunk.

“She struck the pier with a force great enough to break her to pieces, but her crew was able to jump onto it before she came apart,” he said. “We suspect that the ship could have sunk and been de-masted by pulling the masts off from the surface. This could also have dragged the ship along the bottom.”

Upon their initial discovery last year, Mr. Couch, Mr. McCarthy and his wife, Kathryn, started searching for clues on the 50-foot-long and 14-foot-wide sloop that sunk near Cape Vincent.

The shipwreck was listed last fall as a new archaeological site with the state Historic Preservation Office — meaning that nobody is allowed to disturb the wreck without a permit — but the crew, using computer simulations, recreated the ship’s internal dimensions to determine how it worked and possible reasons as to why it sank.

And after digging through old newspaper articles and ship registries, they finally found a ship matching their profile of the wreck.

Named after mid-1800s American bare-knuckle prize fighter John Camel Heenan, aka the Benicia Boy — who died around the time the ship was put into commission — this particular sloop was able to carry a load of 10 cords of cedar wood and most likely sank during an attempt to move some cargo to Carleton Island in bad weather, Mr. McCarthy said.

Sloops are small vessels — less than 60 feet long and rigged with a fore-and-aft sail and a single mast — once used to transport goods by navigating through the shallow waters of small rivers, bays, canals and harbors. They eventually were replaced by steamships in the 1880s.

Very little is known of sloops built in the Great Lakes, and along with a potential in-depth archaeological survey of the Box Stove Wreck, the crew is seeking additional information — pictures and descriptions of sloops — from the Lake Ontario-St. Lawrence River community.

“We’re still trying to gather the full story,” Mr. McCarthy said Monday.
Anyone with information on the Benicia Boy or sloops of the Great Lakes may contact Mr. McCarthy at 299-3435 or via email at blsi@earthlink.net.
Posted by Blue Ledge Systems Inc. at 11:42 AM No comments:

By JAEGUN LEE
TIMES STAFF WRITER
CLAYTON — A local veteran diver is spearheading a project to attract the diving crowd to downtown Clayton by installing a removable dock with a T-ladder at the Thousand Islands Regional Dock at Frink Park on Riverside Drive.

Although plans are preliminary — with project permits pending and about $6,000 to be raised — Raymond I. “Skip” Couch, a scuba diver since the 1960s and founding member of the Clayton Diving Club, said the divers’ access point could be installed as soon as next spring.
“I’ve been working on this for two or three years now,” he said, adding that Clayton has the potential to become a popular spot for recreational diving and especially for training.

Local governments have given their blessings for the project, which would be funded through donations from divers and possibly businesses.

The proposed U-shaped wooden structure — a floating dock that would be placed near the village’s main dock — would be 18 feet by 16 feet with a 6-foot-long middle section. It would be removed at the end of each diving season for maintenance and repairs.

Nearby St. Lawrence riverfront villages, such as Alexandria Bay and Cape Vincent, attract a large number of divers each summer, and Mr. Couch estimates that more than 50 divers would visit Clayton every weekend if they had better access to the water.

Village Trustee Dennis H. Honeywell said the access point also could be used as a kayak launch and should not interfere with the docking of boats.

If the project becomes a reality, he said, village businesses should benefit from the access point because divers are “stay-over people” who are likely to lodge and dine in Clayton.
Posted by Blue Ledge Systems Inc. at 9:24 AM No comments:
Newer Posts Older Posts Home
Subscribe to: Posts (Atom)