The Clayton Diving Club Inc. was formed in 1967 and incorporated in 1968. It went on to buy land, had several dive boats and for over 30 years operated as an active Dive Club. In the late 1990's its numbers decreased and eventfully it divested itself of its assets and functionally stopped operating.

This video provides a glimpse into the exciting and interesting first years of sport scuba diving in the Thousand Islands. In 2010 a new Clayton Diving Club formed to carry on the rich tradition of scuba diving in Clayton, NY. http://claytondivingclub.net/

Posted by Blue Ledge Systems Inc. at 12:57 AM No comments: 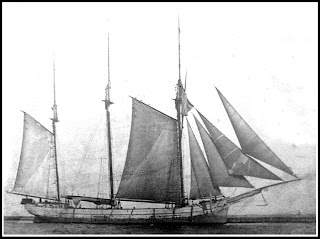 August 17, 1889, the three-masted wooden schoonerA. E. Vickery struck the shoal above Rock Island Lighthouse while entering the AmericanNarrows with cargo of 21,000 bushels of corn destined for Wiser’s Distillery at Prescott, Ontario. She was launched July 1861 at Three Mile Bay, N.Y. as the J.B. Penfield and renamed the A. E. Vickery on February 25th, 1884. She was about 130 feet long by 26 feet wide and had a depth of hold of 11 feet